After completeing the RCTP hardware the flight controller needed to be adjusted for stability. I am using a simple PID controller for now.
Starting with YAW I suspended the RCTP from an elastic ribbon so that it was able to yaw freely. 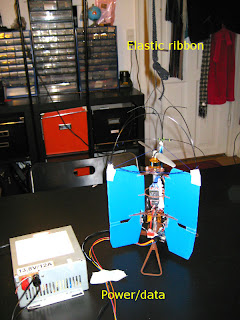 Throttle and YAW tuning parameters was supplied from the RC-controller via wirerless. Measurement data was received via. cable. 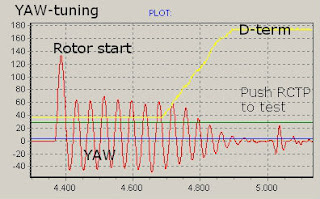 I chose some conservative initial settings for the PID controller (Blue: Integral=0, Green: Proportional=30, Yellow: Derivative=35-ish). And commanded (via the RC controller) a yaw angle of 0.
When starting the rotor the system was oscillating around the YAW axis as suspected. Increasing the D-term (again via. a slider on the RC controller) cancelled the oscillation. A push on the RCTP confirmed that the regulation loop worked. 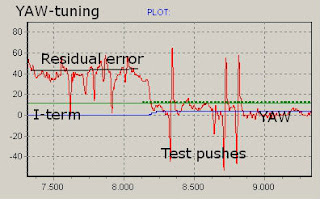 After some testing it was confirmed that the YAW angle of the RCTP was not zero (zero angle is currently the compass angle in which the flight contrroller is power up). Increasing the I-term fixed that problem.
Yaw is now stable regardless of the rotor speed.
Posted by GeekPhysical at 12:47 AM