I have been asked to make a device that allow a space capsule to be found at sea after splashdown. The device should transmit it's GPS position via. VHF radio to a fleet of recovery vessels.
The device should allow regular people without special equipment or training to receive the GPS position.
It was suggested to use plain speech to transmit a WGS84 GPS message that is compatible with most navigation equipment. 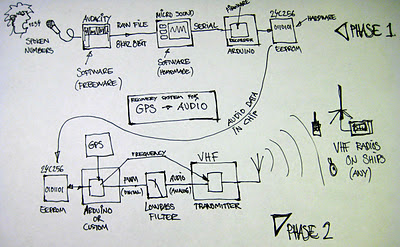 This is my initial approach to solving this problem.
First the numbers 0 to 9 and the words "East", "West", "North" and "South" was recorded using a digital recording program (Audacity). The audio file was cleaned and compressed so that the words had an equal voloume and the length was fitted to exactly 32 kSamples. The audio file was then converted to 8bit mono@8kHz .raw format. The start sample and duration of each word was noted.
A special program was made that would transmit the .raw file over a serial port. A 24C256 IIC EEPROM was connected to an Arduino board and a firmware was made to receive the .raw file and flash it into the 24C256.
The EEPROM now contained spoken words that could make up the WGS84 message and a list of starting points and durations for each word.
The firmware in the Arduino board (later to be replaced with custom hardware) was changed to a firmware that received GPS data in the form of NMEA and read these out using the words from the EEPROM.
The micro controller on the Arduino board outputs the audio as PWM which is low pass filtered to make a analog line signal. This signal will later be fed to a custom VHF transmitter that will be integrated as part of the system.

This is a audio test of the system so far. The voice is synthesized but will be replaced by a sexy female voice. 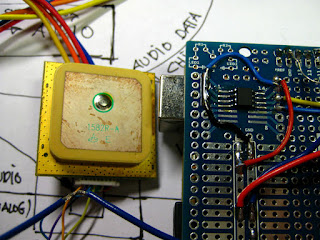 The GPS and audio chip

Posted by GeekPhysical at 3:52 PM